John le Carré is the pseudonym of David Cornwell, a British spy novel author. A favorite of mine in fact. Le Carré really was a spy, although I´m not sure where and when he worked, he did work for Britain´s secret service, which gives a reality notch to his novels. Many of his books became movies afterwards, such as Tinker Tailor Soldier Spy (great), The Constant Gardner (sucks), A Most Wanted Man (cool but not enough), among some others.

John le Carré´s novels are very different from the usual action filled spy story we are used to. The novels are slow-paced, with almost no action at all in their majority. Well, his new books are more action filled, but are also the worst ones, so please disregard them. All of them also have a heavy and intricate writing style. Some excerpts reminded me of classic American literature I used to read in school. I know it sounds boring and excruciating, but it´s just not. Quite the opposite actually, they are smart, politically infused, controversial and very intriguing to read.

Le Carré is able to deliver a very original espionage story, mixed with a real background that´s based in history and current world events, especially those that happen during the Cold War. I say this because, let´s face it, James Bond is not real, his enemies are not real and the explosions are very not real. Le Carré´s novels usually revolve around someone´s death, interpolated with a political issue, being solved or investigated by a British spy with a complex and deep personality. 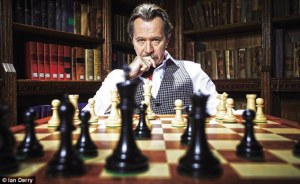 And of all his spies with complex and deep personalities, my favorite is George Smiley. Smiley works for the British intelligence service at the top echelons and knows his way around. He is very quiet, and extremely smart. When I say Smiley´s smart, I mean he can see the world in front of him evolving like a chess game, and he is a master player that can untangle any stratagem with its due patience. He is patriotic, sharp, loyal, unsociable, and in my view, not athletic at all. Smiley is not the spy you´re used to seeing in the movies, but rather one you come to admire and respect once you get to know him. Like a good old scotch, he´s an acquired taste.

Of course my favorite novels are the ones which I get to see Smiley working. I would most recommend the Karla trilogy, a series of three books on which Smiley is “playing chess” with his Russian archrival Karla during the Cold War.