Not my favorite book, to say the least. There are some interesting ideas in it, but it´s not at all a great work, unlike some people are saying in the streets. Submission achieved bestseller status in several countries and created a lot of fuss in the market. Readers and reviewers are comparing Houellebecq to Huxley or Orwell. That´s just absurd. It´s an offense to Huxley and Orwell to compare them to a mediocre author like Houellebecq. 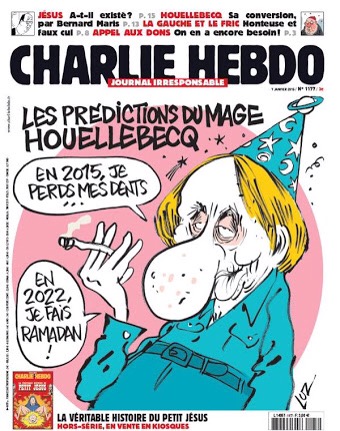 The fuss and talk we hear are due to the positive aspects of the book, which is the plot, or at least part of the plot. The book is about a university professor and his miserable life, and the change, in France, from a liberal none religiously affiliated government to an observant Muslim state. It´s an interesting idea to envision such a change, and since Muslimism is all we see on the TV lately, it reminds us that it´s a possible scenario for several countries in the future. It becomes an entertaining and curious exercise to imagine how France, or any other liberal country, could so easily become Muslim, and how each of our daily lives could change: education only for men, women in different clothing, men having multiple wives… However and very unfortunately, those ideas are not enough to write a good book.

Houellebecq is not a genius like Jules Verne or George Orwell. Everybody knows what´s happening in the world, how the Muslim fundamentalists are trying to disseminate their influence and religious thoughts throughout the Middle East and Europe. They even declared a Caliphate, which is exactly a Muslim state. Furthermore, it´s no hidden fact that France has a considerable Muslim population. So, yes, Houellebecq had an exotic and interesting idea, but no, he’s no visionary.

When I said only part of the plot was good, it´s because the Muslim concept is scattered thinly in the whole story. Houellebecq spends a lot of time illustrating a very boring, miserable, sad and lonely life of the main character, professor something…. I don´t even remember his name. If the author wants to describe a new Muslim world and how it came to be, then just do it, don´t spend lines and lines describing a lousy teacher that likes to drink and have meaningless sex for the rest of his life.

Houellebecq also has a unique writing style. Not one to my liking, but different nonetheless. It´s very rough and brusque, it doesn´t have any finesse. For instance, he throws at the reader a lot of sex and women from the professor´s perspective, which isn´t pretty, nor delightful, but rather simple, aggressive, kind of ugly, and chauvinistic. In a way you get to feel a bit more the character he´s trying to describe, but it´s not a pleasurable and smooth read. He also tries too hard to intertwine the professor´s life, as well as the story in general, with Huysmans´, a French writer from the late 1800´s. This writing technique can be very useful to thicken a plot or enrich a book, but Houellebecq it´s clearly not an expert employing it. Every couple of pages Huysmans is there, up to a point that whenever I saw his name I wanted to close the book and throw it at the wall. Huysmans became an annoyance on a could-have-been (but it´s not) enveloping novel.

Synthetizing everything, Submission is not what it seems. Although how a Muslim party could take charge of a liberal state is indeed an interesting concept to envision, it´s very poorly developed. In addition, a pathetic main character with a depressing life, combined with an annoying writing style, simply don’t make the book a marvel.